Come in, everyone is welcome! 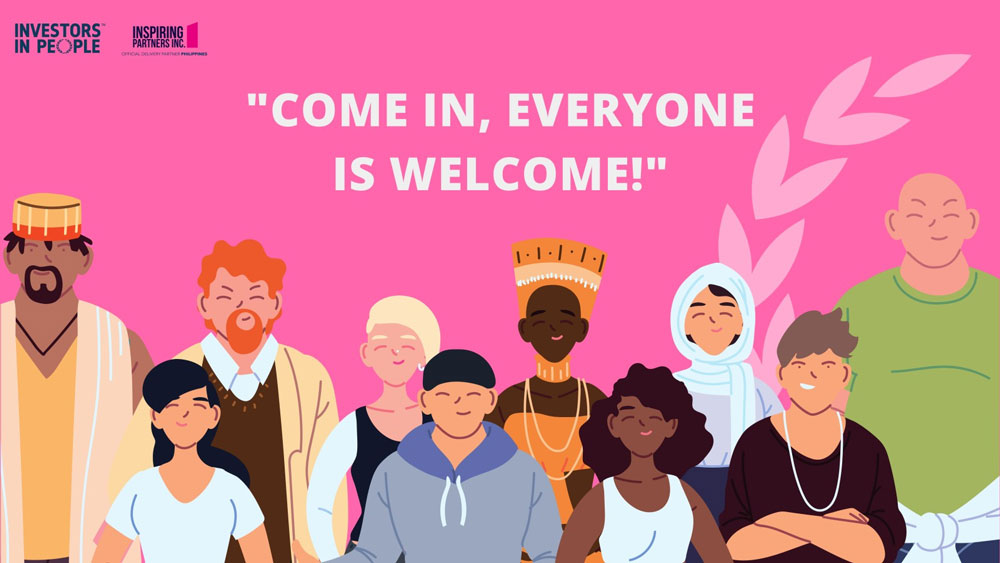 Forty years ago my company sent me to a 5-day leadership program. There were 60 people on the course, and only one female (me). More recently I saw a photo of a group graduating the same program. The demographics were substantially better. Investors in People was born just 10 years after my singular experience. Since the start, Investors in People has always been about everyone in an organization.

In 30 years there have been various versions of the Investors in People standard and framework , but that has always been an underlying principle. Everyone is important and everyone matters. In earlier versions, the Investors in People Standard talked about equality and fairness. That is still there, but now the framework also guides and encourages organizations to be diverse and inclusive.

Why it’s not easy

It should not be difficult to be diverse, given how different we all are, but the way we have organised as societies and organizations has built in biases, pushing us to was inequality and sameness. When we recruit we look for people from certain schools and universities for example, some jobs we recruit men for, and some we recruit women for, and the barriers are hard to break down. They create a mindset that becomes ingrained.

Then we all have our own conscious and unconscious biases, aside from us just feeling more comfortable when we are with people like us. It also makes thing simpler to manage when people are generally the same.

What the research says

There are many reasons why we should make an effort to be diverse though. Mckinsey have been reporting on diversity and inclusion since 2014. Their latest report was in 2020. They have consistently found that companies with higher gender and ethnic diversity are more profitable. The better the diversity the better the performance. “Companies with more than 30% women executives were more likely to outperform companies where this percentage ranged from 10-30, and in turn these companies were more likely to outperform those with even fewer, or none at all.” They found a similar outcome for ethnic and cultural diversity.

The increase in diversity for both though is painfully slow. The companies doing well with diversity are doing better at getting better, but those that are poor are staying the same or going backwards, according to Mckinsey’s research.

Diversity on its own is not that great though. It needs inclusion sitting beside it to be
comfortable. As Mckinsey point out, and Investors in People will wholeheartedly agree, “It’s the work place experience that shapes whether people remain and thrive. Their research found a high percentage of negative comments relating to companies’ work environment and inclusion. The companies leading the field in diversity though, were also doing the most to strengthen inclusion.

There are five good practices for strengthening inclusion that Mckinsey identified in their research;

1. Advance diverse talent into executive, management, technical and board roles

2. Put leaders at the heart of the D and I strategy and hold them accountable for progress

4. Uphold a zero-tolerance policy on discriminatory behavior, such as bullying and harassment, and establish norms for open and welcoming behavior. Ask leaders and people to assess each other on how they live up to the standard.

5. Build a culture where everyone feels they can bring their whole self to work. Foster a sense of community and belonging.

Here’s a nice graphic you can find in McKinsey’s report. 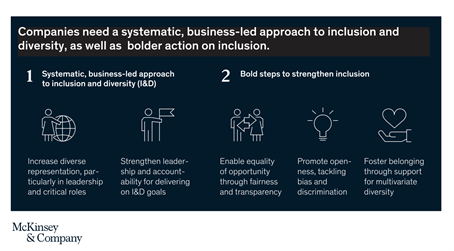 We have certainly come some distance in the last 40 years, but there was a long way to go, and we are not there yet. What we can all do is build a strategy to help our companies be more diverse and inclusive, and more successful in the process.